The Byzantine Empire and its works of art are known for the tangled web of culture and technique that came together to create what we recognize as the iconic Byzantium style. They were heavily influenced by Greco-Roman and Egyptian cultures, selecting what they found important and implementing what they thought would drive their Christian narrative. Byzantium artists used Roman gods to represent Christian characters and had periods of renewed interest in their Greek naturalistic origins. During their time of power they mastered fresco technique, mosaics and icons with a new distinct style dominated church artistic expression, and created illuminated manuscripts and religious paintings that still influence the modern ecclesiastical works.

The crucible of cultures molded Byzantine artists. The mediums they chose and how they represented the narratives and subjects they revered was guided by Byzantium’s neighbors and predecessors. For example, the Acheiropoietic, meaning "made without hands," was inspired by Greek and Roman portrait panels via choosing to depict important or divine people and in such small-scale forms. The coffin paintings of the Byzantium period greatly resemble sarcophagi imagery from Egyptian tombs. The shape of the paintings and stylized features, though not always used in the same location, exhibit many similar characteristics. While not identical copies, Byzantium works pull from civilizations before and around them to create their own distinctive flair.

This melting pot of styles and ideas was also affected by the materials they were able to acquire. As trade became more established and widespread there was a noticeable development in the variety of goods available in the Byzantine Empire. One of those materials they obtained through trade was silk. It quickly became indicative of luxury and was highly coveted. The lack of amount circulating in society, as well as a lack of people with the knowledge to make it, elevated its status as a luxury good afforded by only the rich and higher-class members.

The Byzantine Empire, stealing silkworm eggs from China, started their own production of silks that would be highly valuable, introducing the idea of a five-color silk. Other trade items include spices, incense and ostraka, pottery shards with writing, often in Greek. These goods would be traded along the Silk Road or by ships entering through the Red Sea. Marketplaces would be constructed in major cities such as the ancient city of Tedmor, modern day Syria, or Constantinople which would allow these merchants to pass along their goods and partake in the old art of trading. Merchants from places such as Egypt, Italy, the Middle East, and Turkey, all countries that coincide along the Mediterranean Sea would enter in this activity, spreading and exchanging their culture and textiles which would influence how the Byzantine Empire would produce their art, ‘borrowing’ many different aspects of different cultures to mold into their own. 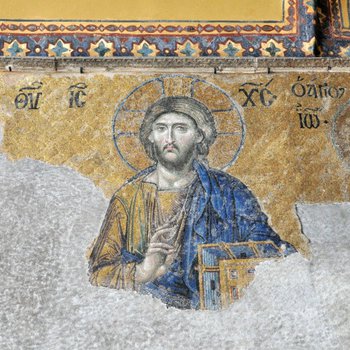 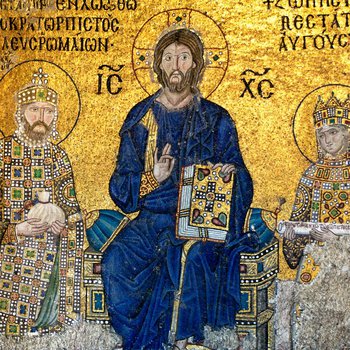 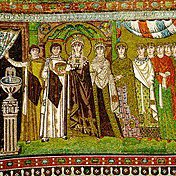