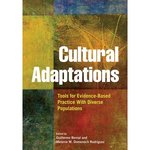 This multiauthored work brings together the scholarly and the clinical in its analysis of two separate yet inextricably linked endeavors in psychology: the cultural adaptation of existing interventions and the movement toward evidence-based practice (EBP).

The unifying theoretical framework of this volume promotes culturally adapted EBPs as productive and empirically viable approaches to treating ethnic minorities and culturally diverse groups. Chapter authors describe cultural adaptations of conventional EBPs for a variety of psychological problems across a wide range of cultures and ethnicities — Latino/as, Chinese, African Americans, and American Indians among them.

Cultural Adaptations will appeal to clinicians who treat an ethnically and culturally diverse clientele, as well as to researchers, scholars, and students, who will value the conceptual and methodological discussions of evidence-based psychological practice and cultural adaptations of psychotherapeutic techniques.